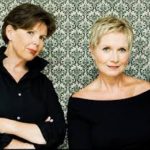 Join us on April 29, 2016 for an evening of music with Susan Crowe and Cindy Church.

Last year named to the Nova Scotia Country Music Hall of Fame, Cindy Church is as capable in jazz and folk as she is in country.  She’s been awarded a Canadian Country Music Award and has been nominated for several Canadian Music Association Awards. Her voice has been described as being “like honey”, but it can also drive a tune home with unbridled energy.  Susan Crowe is a twice Juno nominated singer songwriter. In 2009, she was named the CFMAs English Songwriter of the Year, is a past Music Nova Scotia Female Artist of the Year and has been nominated for both East Coast and West Coast Music Awards.

Together, their styles blend and dovetail, and the professional regard they have for each other is exceeded only by their friendship. They bring to the stage wisdom, grace and a grateful respect for their audiences.

Tickets $15 each or make a night of it with an overnight stay, three course dinner, tickets to the show and full breakfast ($199 per couple).